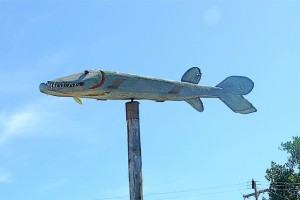 For $20, you get to use all the gear, guides and good times you can handle for a two-night stay. Show up at a state park, and a park representative will walk you through the process of setting up camp.

If you catch any fish as a First Time Camper, make sure to follow the state’s latest fish advisory guide.

The 2011-2012 guide (pdf) has been released by the Michigan Department of Community Health. The update includes nine changes to advisories, two that were relaxed and seven that were expanded.

Advisories in the guides are based on toxic chemicals found in fish. Some types of fish from some locations can be harmful to eat if eaten too often, due to levels of mercury, dioxin, and PCBs..

The guide is available online at michigan.gov/eatsafefish and includes information on fish from Michigan rivers and lakes. The state website also includes tips for choosing fish at the supermarket and restaurants.

The Khapra (cap-ra) beetle, from India, may be the next invasive pest to wreak havoc in Michigan.

A few of the beetles were found recently by U.S. Customs agents at border crossings in Detroit and Port Huron, according to The Detroit News.

The beetle is a threat to the state’s agricultural industry, officials say. It feeds on any dried plant or animal matter, but prefers grains like wheat, barley, corn and rice.

Much like the emerald ash borer has wiped out million of trees throughout the state, the Khapra beetle could wipe out soybean, wheat and corp crops, officials say.

For now, border agents are keeping an eye out for the bugs, and no infestations have been reported.