The public is invited to join local, state and federal partners for the reintroduction of juvenile sturgeon into the Saginaw Bay watershed. 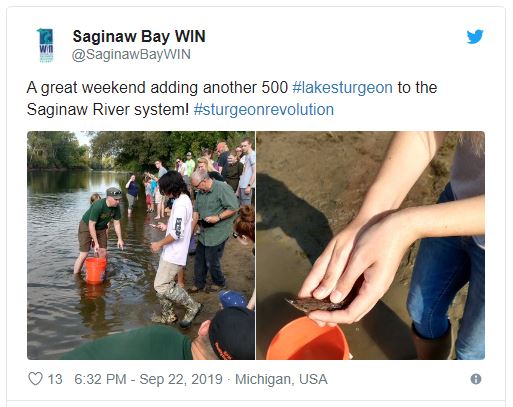 A number of agencies, organizations and companies are playing roles in the effort to support sturgeon restoration in the Saginaw Bay watershed.

These include rearing the fish, and education and restoration projects. Area schools raised baby sturgeon in their classrooms, including Western Middle School in Auburn.

More information is online at SaginawBaySturgeon.org.

That’s according to a new analysis from the nonprofit E4TheFuture and a national, nonpartisan business group called E2.

Energy efficiency workers now account for 20 percent of all energy workers in Michigan, and 28 percent nationally.

Among states, California led the nation in energy-efficiency employment; Michigan was eighth.

There are now more than 360,000 energy efficiency businesses operating across the U.S., including 17,000 in Michigan.

Energy efficiency jobs include those in manufacturing, such as building appliances, windows and doors and lighting systems. They also include jobs in construction, such as retrofitting buildings, offices and schools.