As heard Dec. 9, 2011, on Delta College Q-90.1 FM …
1.
Members of the nonprofit Huron Pines group in Grayling at pouring over stats from a study done this year of the Rifle River watershed. 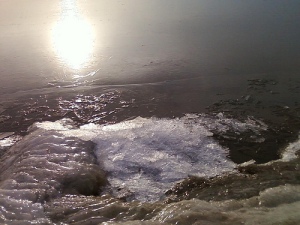 The group spent time photographing and measuring the area this year. A total of 245 road and stream crossings sites were surveyed, along with 405 streambank erosion sites.

In roadside ditches and publicly accessible lakes, a total of 214 incidents of invasive species were recorded. In addition, 86 small dams were located via aerial photography and GIS analysis.

Huron Pines plans to use this information to prioritize restoration projects for the next two years.

The information also will be used to build a Rifle River Watershed Management Plan textbook. The book will be a resource for local planners and other interested in watershed protection.

More people are generating power from renewable resources in Michigan.

A new report from the Michigan Public Service Commission shows that the number of net metering customers increased from 254 in 2009 to 628 in 2010.

What’s the state of Michigan’s environment?

A triennial report from the state DNR and DEQ documents changes in environmental trends including land use, animal and fish populations, invasive and endangered species, air pollutant levels and water quality.

For Saginaw Bay, the report says that between 1993 and 2009, average phosphorus levels were at their lowest in 1996 and 2005 and at their highest in 1998. Phosphorus is a nutrient that contributes to algal blooms in the bay.

State official says it appears that mean total phosphorus levels are decreasing in the bay, but a trend can’t be identified as of yet.

A number of actions have been taken to reduce phosphorus levels in the Saginaw Bay watershed. That includes a Bay county ban on most residential phosphorus fertilizers that took effect in 2009.

A statewide ban on phosphorus-based fertilzers goes into effect on Jan. 1, 2012.