A New Saginaw Bay Research Vessel, and Cleaning Up Microplastics

The 24-foot boat was christened at a ceremony on Thursday (Sept. 19) at the university, with help from a director from the Michigan Department of Environmental Quality.

It will support SVSU’s Saginaw Bay Environmental Science Institute, serving as a mobile classroom for students and faculty researchers.

The new research vessel Cardinal II joins others on the bay, including four boats used by the state Department of Natural Resources to study fish populations. 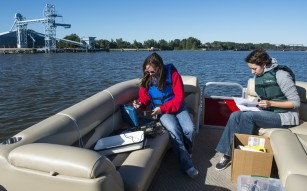 2 – On Saturday (Sept. 21), Adopt-a-Beach cleanups will be taking place throughout the Great Lakes, including on Saginaw Bay.

The public beach at the Bay City State Recreation Area in Bay County is among the sites for the annual cleanup, conducted by volunteers and organized by the Alliance for the Great Lakes.

This September’s cleanup is noteworthy because it’s about more than regular manmade debris, like cigarette butts and plastic bags.

There’s the ongoing issue of microbeads that have been found in the Great Lakes. The beads, also called microplastics, are blamed on household beauty and cleaning products that aren’t removed in the wastewater treatment process.

During the cleanups, volunteers will be collecting data and helping support regional research on the tiny plastic particles.

According to the Alliance, the impacts of these particles could include absorption and transport of other chemical contaminants, ingestion by aquatic organisms, or effects on microbial communities in freshwater ecosystems.